It is rare that an academic surgeon has an opportunity to write about something as lofty and important as dress. It is something that we often whisper about and sometimes talk about with colleagues, but usually in private settings and not on the podium at a scientific meeting. We all know that what you wear shouldn’t affect how others perceive you. However, we live in a world where first impressions are formed in seconds, and our interactions with certain individuals or groups of individuals may not last more than a few minutes. Therefore, like it or not, your appearance does influence your perceived performance. For physicians, what has been best studied is the effect that attire has on patient perceptions of competence. Enough studies have been published on this subject that Petrelli et al. were able to conduct a metanalysis of 30 studies examining the effect of physician attire on surveyed patient assessments. Almost all of these studies examined the effect of formal attire and/or white coat on patient perceptions of various physician attributes, and most reported a patient preference for formal attire and/or white coat, although scrubs were preferred in some of the studies focused on procedural specialties. A few of the studies also uncovered subgroup differences such as younger patients being more accepting of casual attire.

In academic surgery, however, our patients are not the only ones assessing our performance. Over the course of our careers, we run a gauntlet of events in which our ability and future potential are assessed in short interactions with small groups of “strangers” (residency and fellowship interviews, oral board exams, job interviews). If we are successful, we are rewarded by opportunities to be regularly assessed in short interactions with larger groups of strangers and non-strangers (scientific presentations, lectures). It is not as simple as whether or not to wear a white coat or scrubs. It is easy to recognize completely inappropriate attire for such occasions (See below). However, there are more subtle messages that may be transmitted based on how trendy/conservative your 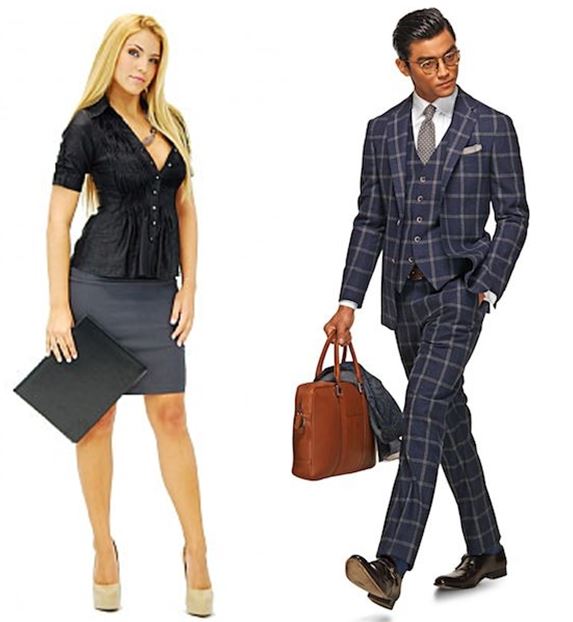 clothing is (including color), grooming (makeup, hairstyle, facial hair), body modifications (piercings, tattoos), and—for women—“sexiness” (skirt length, neckline). In my own non-systematic review of the literature (searching terms such as “physician attire”, “professional attire”, “physician dress”), I found no scientific studies specific to physicians addressing issues beyond formality and uniform. Interestingly, there were a few studies in the nursing literature and for other allied health professions. However, non-healthcare professionals have devoted much more attention to this topic! Most of the publications on this topic are non-scientific (try searching amazon.com!), but there have been numerous studies in the business and psychology literature examining specific aspects of professional image. Several studies have demonstrated that tattoos and non-traditional (non-earlobe) body piercings can be associated with negative perceptions about personality characteristics. That neatness of grooming is consistently considered to be favorable is unsurprising. An analysis from the International Journal of Hospitality Management (to which I am sure most surgeons subscribe) includes a review of this literature and also examined the effects of several aspects of appearance on the perception of interviewees. Attractiveness was viewed favorably but not as favorably as neatness, and neatness was more important to female interviewers than male interviewers. Faculty favored conservative clothing, while students viewed trendy clothing more favorably. Dark colors were viewed favorably…but only by “experienced” interviewers. Do these observations apply to surgeons?

The following represent my own personal opinions and do not necessarily reflect the views of the management:

Interviewers and patients should not be distracted by your appearance. Although it is OK to deviate from the traditional dark grey suit, overly trendy or colorful clothing can send the wrong message. Individuality is good, but clothing that is too far from the norm can indicate a degree of non-conformity that may not be appealing to your potential boss. Neatness of clothing and grooming convey that you pay attention to your appearance (and hopefully also to your job performance). However, hairstyles and—for women—makeup that seem to require a lot of attention can convey that your appearance is a higher priority than your job performance. Furthermore, studies may show that “attractive” people are viewed more favorably than “unattractive” people, but being too attractive (or even “sexy”) can cause people to look at you instead of listen to you. In particular, patients can feel vulnerable, especially if they are undressed, and seeing a “sexy” surgeon may make them feel even more uncomfortable. These issues all become somewhat less important after the “first impression,” when you have established a relationship with the patient or colleague and are hopefully being judged on your actual performance rather your appearance.

In order to generate a dialog about these issues, we have organized a session for the Association of Women Surgeons Luncheon at the upcoming Academic Surgical Congress entitled “You are What You Wear? How to Project Your Best Self.” We will hear perspectives from Profession Image Consultant Dustin Byrd, Dr. Cynthia Shortell (Chief of Vascular Surgery at Duke), Dr. Herb Chen (Chairman of Surgery at University of Alabama—Birmingham), and Dr. Julie Freischlag (Dean of University of California—Davis). These issues are relevant to men and women, and we expect that everyone will find this session interesting and entertaining!

Dr. White received her medical education and general surgery training from Duke University. While a resident, she spent three years in a nucleic acid therapeutics lab working on a class of molecules known as "aptamers". After finishing her residency, she completed a surgical oncology fellowship at Memorial Sloan-Kettering Cancer Center then returned in 2007 to Duke, where she is now an Associate Professor. She is "80% research" and runs a lab focused on aptamers for the diagnosis, imaging, and treatment of pancreatic cancer, which is also her main clinical focus.