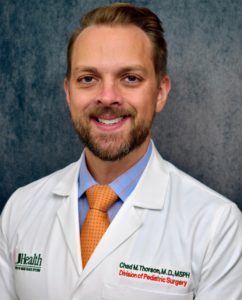 Each month, the AAS Membership Committee presents the “Member Spotlight” – an opportunity to introduce you to a member of your association.

Dr. Chad Thorson is an Associate Professor at the University of Miami in the Division of Pediatric and Adolescent Surgery. He currently serves as an Associate Program Director for the general surgery residency.

Dr. Thorson was born in Omaha, Nebraska, but grew up a military brat, living in 5 states before settling in Florida. He concomitantly obtained his Certified Nursing Assistant (CNA) certificate during high school. He worked as a CNA throughout high school and college and was heavily involved in the Health Occupations Students of America (HOSA), serving as State President. He graduated with a BS in biology from Florida State University before returning to Nebraska to obtain his medical degree at Creighton University. He then completed a general surgery residency at the University of Miami/Jackson Memorial Hospital. During this time, he completed a research fellowship in the division of trauma/critical care and obtained a Master of Public Health degree. Lastly, he pursued fellowship training in pediatric surgery at Stanford University before returning to Miami as faculty.

Dr. Thorson practices the full scope of pediatric surgery but has special clinical interests in advanced minimally invasive surgery including laparoscopy and thoracoscopy in neonates. His research interests focus on trauma and nationwide surgical outcomes. He is the director of the Injury Free Coalition for Kids in Miami and is passionate about car seat safety. He has helped develop a screening program in the emergency department which has led to increased car seat distribution in an underserved population.

Chad is an avid cook and can frequently be found hosting residents and faculty over to try new recipes. He is known for paella, meat smoking, sous vide, and lobster mac & cheese. He enjoys weightlifting, Peloton, and is an avid rock climber. He has trad/top rope climbed in California (Sequoia, King’s Canyon, Pinnacles), Quebec, Saint Lucia, and has an upcoming trip to Mallorca in the Balearic Islands.

Save the Date! Saturday, October 21, 2023 Boston , MA Courses will take place immediately prior to the ACS Clinical … END_OF_DOCUMENT_TOKEN_TO_BE_REPLACED