On Sunday, Oct 29, 2017, the new wing of Operating Rooms at the Virginia Commonwealth University Medical Center in Richmond, VA was open to friends and family of OR staff. The event was “VCU OR Family Day” and employees brought their families to see the highly specialized and technical environment they work in every day. Actual operating rooms were decorated by service teams – there were pediatric, orthopedics, oral/maxillofacial, thoracic, cardiac, and general surgery rooms set up, each with interactive activities for kids (and interested adults!). The Halloween theme fit nicely with the event, as children were “dressed up” in OR gowns, caps, masks, and gloves prior to stopping in each room for the activities and to “trick or treat” for candy. Organized for 20+ year by Kathy Hosterman, BSN, RN, CORN, the Specialty Team Manager (STM) for the thoracic, pulmonary, and pediatric surgery teams, this year was her last year as she retired as of November 3, 2017. This interview documents her role in the process, the key personnel and planning steps necessary to hold the event, and the impact of Family Day on the day to day culture in the VCU operating room work environment. 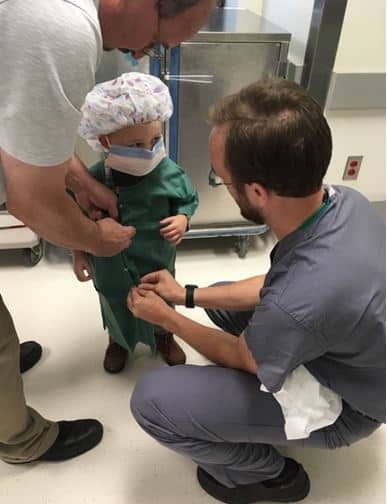 Jeremy: “Tell me about your role in the VCU ORs, how long have you worked here and what do you do?”

Kathy: “Alright, so, currently I’m an STM with thoracic, pulmonary, and peds. I’ve been here 41 and a half years. I was in charge of cardiac for a long, long time too, and I finally decided it was time to take less on. An STM covers a service, answers questions, makes sure you have sets, case carts. You have a staff that you’re responsible for, but you still work in rooms. So, it’s about 60% management, 40% room time. Still cover call, so you’re a busy person. And you’re always teaching.”

Jeremy: “So, how did the family day start?”

Kathy: “Well, we were a smaller group when we started family day about 23 years ago, I’d say. Really it was a couple of staff who went into education, we decided this would be good. There are always swings of moods of people who are happy, people who are unhappy, so we thought, let’s do this to make everybody feel like this is a good place and we’re a family. Because you’re here around the clock sometimes and you feel like you’re never home and your family doesn’t know what you’re doing. So that was the premise, let’s let our families see what we do all day long, because nobody gets up here, its closed doors. And then, we did it for a year or so, and they moved on to other places, and it was a good thing, so we said let’s keep doing this, so we did.” 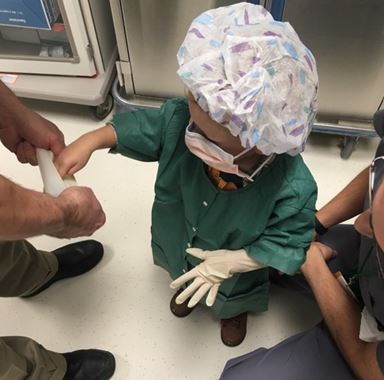 “Its evolved over the years, the first years we did it, somebody would be a patient, we would take them from the PSU to the OR, show them how to be prepped, we would do a basic “this is a real operation” type thing, and then we would take them to PACU. You’d have groups following these stretchers around. But then it was easier to start having people come to the rooms, and give them more hands on things to do.  Set up the different rooms, different kinds of services, things that the kids could really get into and put their hands on. So now we just have some signs that we post, like this is main control, this is what goes on here, this is PSU, this is where you start.”

Jeremy: “Has it always been held around Halloween?”

Kathy: “Its always been around Halloween, except for two when we’ve had to do it around Easter time.”

Jeremy: “It seemed to work well around Halloween because you kind of dress up…”

Kathy: “You dress up, and the thought was well, you know if mom and dad don’t have something to wear for Halloween, they can wear the hats, masks, gloves, you know.”

Kathy: “Well, we had done it 18 years in a row, and then we had a 4-year gap because of construction, so this was the first one we’ve done since then, and hopefully I’ve taught everybody what to do this year, so they can continue it.”

Jeremy: “How do you mobilize all the volunteers? Who are the key people to have involved?” 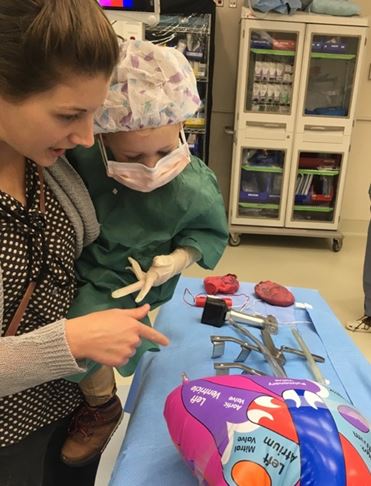 Kathy: “Your leadership has to agree to do this, because you’re shutting down OR rooms. Now, granted, we always do it on a Sunday, so there’s a minimum amount of rooms you’re going to be running anyway. But you still have to shut down an entire area, because you can’t have patients and outside people mixing. So, you have to shut down a whole wing, have a little security to keep people from wandering around. People are coming with OR staff, so most staff know to keep people from wandering, don’t just send them up. That’s why we don’t put out major bulletins, it’s strictly an in-house offering.” 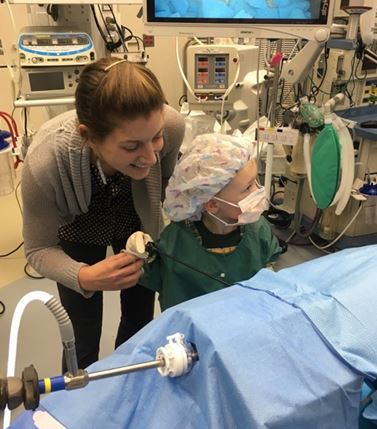 “It does require some money, because we usually cater, we usually get one little gift. The candy is bought by staff, that’s totally volunteer by staff. Most of the bags are bought by staff, any other little things that are around, staff end up buying, because they want it to be successful. And you start early, like July/August, you start putting up signs, talking about it. Because we hadn’t done it in a while, I started putting up signs, pictures of previous ones, because we have a lot of staff now who’ve never seen one, didn’t know what it was. And then staff who have done it before, and then a lot of physicians come with their kids. They are like, ‘Oh we can’t wait until we have another Family Day’. People bring their parents, older people, because they don’t know what goes on in here either. It all works well.”

Jeremy: “So key personnel, getting the hospital leadership involved…”

Kathy: “There’s always a group of people who are saying, “I want to do this, I want to be involved.”

Jeremy: “And they are coming in as volunteers? Because the people working have to run the OR?”

Kathy: “They are coming in as volunteers, the people working have nothing to do with running family day, because they have to run the ORs, apart from if they get a break they can come over. But otherwise, it’s strictly a volunteer thing. Now, a lot of times in the end our manager would pay us as project pay. So, people did get paid a lot of times in the end. And the EVS has to have a lot of involvement, because somebody has to clean up after us. And you invite your people from SPD, because they provide the instruments, and are going to have to clean them in the end. So, you invite certain groups, and make sure they are involved from the beginning too, because they’re going to have to do extra work. Because you go down and you get sets, you ask for the pack. Most of the disposables are things that we just collect over the summer, all the gowns, because there are many times we open something and it’s not used, or your case is cancelled before the cases ever starts, because being a teaching institution you get a lot of, that’s not what we’re doing.”

Jeremy: “So you start months in advance, collecting these things.”

Kathy: “Yes, and you just have to find a place to put it, and you end up with your office full of stuff, and you can hardly move.”

Kathy: “Yes, you invite reps, they are always anxious to help out.” 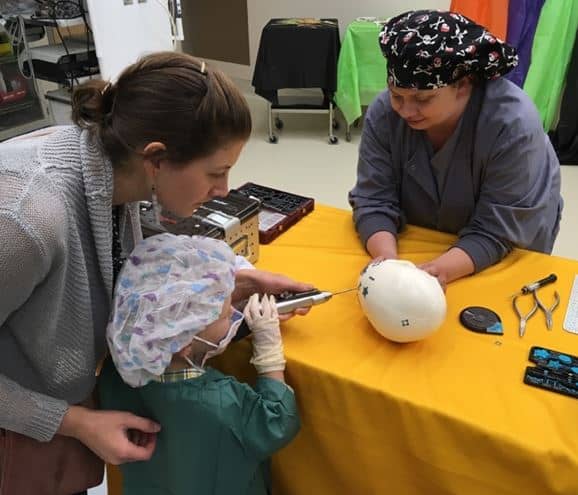 Jeremy: “Are they involved in funding, or sponsoring a room?”

Kathy: “Well usually whatever service works with that rep, like the oral/maxillofacial rep, they brought a lot of skulls, and the thoracic surgeons specifically asked one of the reps that we work with to do rib plating, sternal plating. And he [the thoracic surgeon] made his own ‘chest box’ [for thoracoscopic simulation]. Yeah, if you can get surgeons involved, it’s great. One of the orthopedic surgeons was there to run the little mini-C arm so you could get your hand x-ray’d. Cause you have to have a surgeon to do that, when they [OR nurse volunteers] don’t have him, or a surgeon to do that, they don’t get to run the x-ray! They do other things, they do casting. There was a rep in there to do plates/screws.”

“The first couple years there was a general surgeon who would come and run the laparoscopic room and we had an actual model at that time, then we put a chicken inside the patient and he would put clips on…it wasn’t as much hands on, now it’s much more hands on.”

Jeremy: “And the one room where you had the chicken, and the bovie…”

Kathy: “Yes, that’s your pediatric room, you have the small pediatric set, you dress up the kids, there you get to bovie the chicken, and suck out some kool-aid that looks like blood.”

Jeremy: “Nice! What impact have you seen, over the years, from Family Day?”

Kathy: “I think it makes everyone feel more like a team, they’re just happier around that time of year, I think it just helps to be able to share with their families what they do. And you know, it just takes a little work, but everybody feels better.”

Jeremy: “When you step back and think about it, we are doing a lot of very specialized, very unique things, we’re all very blessed to be able to work here…and coming from the outside it’s hard to imagine all this stuff, so it really is neat to be able to see it.”

Kathy: “Yes, and, most of the staff bring their kids, and when the kids get a little older, like my nephew, I think he was about 8 we did the first one, and then by the time he was 10 he was helping run a laparoscopic room, he would hold the telescope and the younger kids would get a chance. He didn’t come this year, but previously he came for 18 years in a row.”

Kathy: “I think it was a boy scout troop he brought, about 30 kids, as well as his own kids. You know, and we had the ‘staple the banana skin back together’, that was one of the STM’s sons running that. We find things for the kids getting older, because sometimes they are like ‘do I have to go?’ But then they realize they can run a room. Some kids are like, ‘that’s just gross’ and other kids are like, ‘oh, I want to do that when I grow up’.”

“So, it’s hard to say how much impact, and what they actually come and do, but at least they have a much better understanding, when mommy and daddy come home exhausted, or leave on call in the middle of the night.”

Jeremy: “Thanks so much for your insights!” 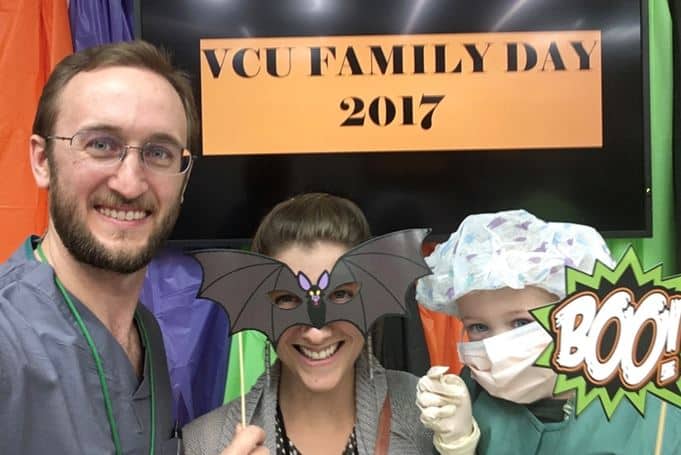 AAS Leadership Committee Meeting
Self-Care During the Holidays: How the busy stay well during the most wonderful time of the year

Save the Date! Saturday, October 21, 2023 Boston , MA Courses will take place immediately prior to the ACS Clinical … END_OF_DOCUMENT_TOKEN_TO_BE_REPLACED