Although Uganda’s yearly mango season will come to an end this month, its legacy will last even longer. Hospital wards across the country will remain packed with injured patients even after the towering trees no longer yield fruit. Residents of the eastern town of Soroti, for instance, are all too familiar with a classic story: the boy clambering up 30 feet in the air in search of a juicy prize; one misstep leading to a terrible fall, followed by a frustratingly slow trip to the hospital, where definitive surgery is advised but not financially feasible; the ensuing weeks spent on traction while waiting for a fractured long bone to mend. While local tales about the danger of fruit trees have always been common, a trauma registry implemented at Soroti Regional Referral Hospital in partnership with the UCSF Center for Global Surgical Studies in 2016 has only confirmed these warnings. During peak times, roughly three patients present to the hospital each day after suffering an injury from a fall, the most common mechanism of injury in Soroti. Unsurprisingly, data collected over the past two years also indicate a significant burden of orthopedic injury, with nearly half of all trauma patients suffering a fracture, sprain, or dislocation. 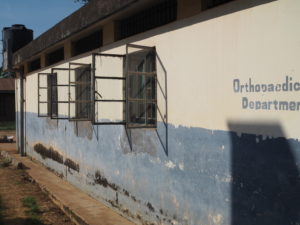 Such information is valuable for many reasons, especially when juxtaposed with the institution’s current state of affairs: lacking a functioning X-ray machine, a dedicated emergency room, and an orthopedic theatre, making it nearly impossible for Soroti’s lone orthopedic surgeon to do her job. The discrepancy between the volume of musculoskeletal injuries and the dearth of resources for their care is even more striking on the ground. Confronted with the sight of patients on crutches sent downtown to pay out of pocket for an X-ray or the rows of children unable to attend school while confined to skin traction in the wards, one finds it easy to feel discouraged. But a glimmer of hope emerges with the realization that the data stands for more than just data. Research in a low-resource setting is a far cry from review of electronic medical records; instead, a spreadsheet populated with thousands of trauma patients actually represents innumerable stacks of paper forms, most of which were filled out by care providers themselves. In aggregate, the trauma registry’s findings effectively highlight a pressing need in orthopedics, but their mere existence — that they can be viewed and discussed all over the world — is all about the triumph of individuals, Ugandans who have committed to supporting work that goes beyond their mere job description.

A visit to the orthopedic clinic in Soroti, like many other parts of the hospital, offers a great deal to take in. The feats of improvisation necessitated by missing gauze and gloves, let alone more advanced materials, leave a lasting impression. The most memorable observation from a year spent in Soroti was the diligence of the orthopedic team; one never found their office unexpectedly closed or overheard complaints about having to contribute to a time-intensive research project, events that were not infrequent in other departments. Somehow, a singular group had managed to maintain 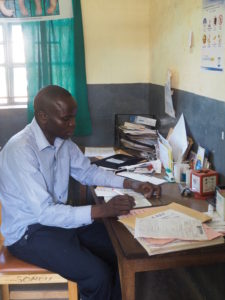 their intrinsic motivation despite dealing with frustrating challenges on a daily basis. According to Billy Outeke, one of Soroti’s three long-standing orthopedic officers (specialized mid-level providers, essentially), such a task is difficult but not impossible. He credits several factors for their resilience. “Most of us come from very difficult backgrounds, and we identify with most of our patients,” he says. “Sometimes we have to pull money from our own pocket to help our patients; they arrive at 5:30 p.m., when you’re supposed to leave the hospital, but because of the empathy you have, it touches you.” “The other thing is the team spirit,” Billy adds. “We work as a team, which makes it easier. We focus on the problems and what we can do; we crack jokes while we work and before we know it, the day is done. We are mostly young or middle-aged, and we believe there is room for change, we don’t give up. We are going back to school for more studies, and it has opened up our minds to hope, that I can cause a change.”

Without the buy-in of Billy and his colleagues, the Soroti trauma registry would not have been possible, and we would be left without an incredible asset in advocating for investment in the prevention and treatment of injury in Uganda. Similarly, local partners working all over the world deserve not only celebration but also thoughtful consideration of what drives them to do what they do, when it would be so easy not to. Sometimes, it’s simply about finding a different perspective. “[Research partnerships] show us there’s a ray of hope; it may not happen right away, but one day there will be more resources allocated to the health sector,” Billy says. “You pull yourself up, and get back to work. We see ourselves growing beyond where we are, and we don’t want to waste this opportunity.”

Dr. Dennis Zheng graduated with an MD from the UCSF School of Medicine and a BA from Harvard University. He recently started his first year of surgical residency at UCLA. While at UCSF, Dr. Zheng worked with Dr. Rochelle Dicker and Dr. Catherine Juillard at the UCSF Center for Global Surgical Studies. In 2016 he was awarded a Doris Duke International Clinical Research Fellowship for a year-long project in Soroti, Uganda, focused on the development and implementation of a traumatic injury registry at the local regional referral hospital.

What if We Were Friends?
Reflections from a “Token Female” Surgeon

Save the Date! Saturday, October 21, 2023 Boston , MA Courses will take place immediately prior to the ACS Clinical … END_OF_DOCUMENT_TOKEN_TO_BE_REPLACED