Where would American Medicine be today if it were not for Dr. William Halsted? Would residency even exist?

Shortly before moving to Johns Hopkins for my research years, my attending gifted me a copy of ‘Genius on the Edge – The bizarre double life of Dr. William Stewart Halsted’. A must-read classic, this masterful biography is authored by Dr. Gerald Imber, a world-renowned plastic surgeon based in New York City. The book sheds light on the life, both public and private, of one of the most important men in the evolution of American Surgery.

Dr. Imber begins by detailing the state of Surgery. Till the mid-1800s the profession was considered far too barbaric for most patients; its scope was limited in most instances to the mere drainage of abscesses and heroic last-ditch amputations, performed in fully conscious patients, with the realization that the later would inevitably be dying from post-operative wound infections. Anesthesia was yet to be fully discovered and intoxicants were not enough analgesia for the torture waiting ahead. There was no concept of sterility, no gloves, no masks, no caps – surgeons would wear the same soiled gown week after week, hold sutures in their mouths and wash their hands AFTER the procedure. Surgical success was measured in minutes to completion of the operation and surgeons were not respected members of the medical community.

Within this environment, the author describes the impressively accomplished life of Halsted. Father of modern surgery, an innovator, a surgeon-scientist; Dr. Halsted was also a pathologist. He was one of the first to perform an open cholecystectomy in the US (that too on his own mother on the kitchen table in the middle of the night) and also one of the first to transfuse blood (to his sister in circulatory shock). Dr. Halsted was a strong proponent of experimental laboratory where ‘surgical techniques were learned, and lifesaving advances born’ and discovered radical mastectomy for breast cancer as well as viable repair for inguinal hernia. He was a staunch advocate of aseptic surgery with gentle handling of tissues and a champion of meticulous hemostasis – principles we uphold to-date. He discovered the use of cocaine as an effective local anesthetic and in the process of self-experimentation fell ill to cocaine addiction himself that he tried to combat with morphine and became addicted to that as well (both of these substances were legal at the time and Dr. Halsted remained highly functional in society achieving ‘more than most men could dream of’). Designer of graphical vitals chart (similar to what we look at in the EMR every morning prior to rounds), he also introduced rubber gloves to surgery (as a barrier for his scrub nurse’s (Caroline Hampton) dermatitis affected hands – who later on became his wife). An astronomy enthusiast, grower of dahlias, an avid smoker, and connoisseur of coffee; Dr. Halsted was The Professor of Surgery at The Johns Hopkins University.

Perhaps most important is Halsted’s contribution to graduate medical training in the United States. Together with Dr. Osler (also a founding professor of Johns Hopkins), Halsted introduced the graduated-responsibility training system we call residency. Based off of a German model, the training admitted men who were required to live at the hospital (hence called ‘residents’), ‘be available for duty 24/7’, and remain unmarried. The number of years required to reach competence and excellence were not defined and not every man would graduate.

Dr. Halsted was known to be meticulous, attentive, and lost in work when performing surgical procedures. He was calm and detached in the operating room even in moments of surgical crises. He spoke little, was focused, and ‘nothing else existed but the work at hand’. The book mentions how one of the Mayo brothers came to observe his famous breast operation and left mid-way in the procedure saying “I have never seen a wound operated at the top while the bottom was already healed” (a statement I’m sure a few of us have heard ourselves too). Halsted had a cold, dismissive and intimidating demeanor, especially on rounds. Incorrect and rambling answers to his questions were met with humiliating responses ‘perhaps you should find a different line of work’. Lying about patient care meant dismissal from training and the end of one’s career. I wonder if this behavior was influenced from chronic drug use or perhaps, a reflection of his inherent perfectionist nature, striving to establish a standard hierarchy and his desire to command respect in the evolving field of surgery. ‘In the end, judgment lies in how well the patient is served’ and in this respect, Halsted was unmatched. We learn how his reputation for excellence extended to having patients travel from as far as Texas to Baltimore, an eight-plus day journey in those times, just to give a blood sample for a study on thyroid disease. How many of us can say that for our patients?

Dr. Halsted’s goal was ‘to train “not only surgeons but surgeons of the highest type”.’ To this effect, he has left an impressive legacy. Numerous distinguished surgeons that succeeded him include Harvey Cushing (father of neurosurgery), Walter Dandy (also a pioneer of neurosurgery), Hugh Young (fundamental to the field of Urology), and many other disciples who established themselves as leaders of surgical education at universities across the globe. Dr. Imber mentions that virtually every academic surgeon can trace their teachers and their teacher’s teachers back to Halsted.

I asked Dr. Imber why in his extremely busy lifestyle he chose to write this biography: “It isn’t all cutting and sewing. Few of us have the single-mindedness of a Halsted, or the luck to have been there when the arc of surgery was ready to rise. The rest of us are fortunate to find ourselves in a fascinating profession, with the opportunity to do a bit of good, and the knowledge that we will never be bored at work. The other things in life make us better surgeons and better people”.

Ultimately, I guess all successful surgical operations in the United States indeed owe ‘Halsted a nod and deep debt of gratitude’ for the work he has done. If you want to know further, Dr. Imber’s book is available on Amazon and Barnes and Noble. 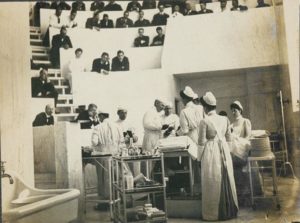 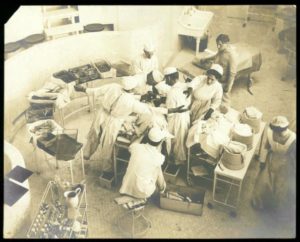 Figure 1. Top: 1903-1904 – Dr. William Halsted performing a surgical procedure as physicians/staff observe in what was called an Operating ‘Theater’ (OT).

Figure 2. Bottom: 1904 – Dr. Halsted performing the ‘all-star operation’ in the surgical amphitheater with his residents (J.T. Finney, Harvey Cushing, Joseph Bloodgood, and Hugh Young among others). Image courtesy of the Chesney Medical Archives of the Johns Hopkins Medicine, Nursing and Public Health. (https://medicalarchivescatalog.jhmi.edu/jhmi_permalink.html?key=159122 and https://medicalarchivescatalog.jhmi.edu/jhmi_permalink.html?key=100921)

I am a Post-Doctoral Research Fellow at the Johns Hopkins University School of Medicine. I completed my medical education at Aga Khan University in Pakistan and am currently a Surgery Resident at Valley Health System in Nevada. My research interest focuses on the role of MDSCs in esophageal and lung cancer metastasis.

Save the Date! Saturday, October 21, 2023 Boston , MA Courses will take place immediately prior to the ACS Clinical … END_OF_DOCUMENT_TOKEN_TO_BE_REPLACED