This is my story of one surgeon’s journey in healthcare leadership, and the lessons I learned along the way.  It hasn’t been a linear path, but it’s been an exhilarating ride.

Three key lessons I learned were:

Lesson 1:  Start with What You Know

I began my post-graduate career as a staff general surgeon at a small Veterans Affairs facility in Shreveport, Louisiana. It was an outlier for high mortality and “never events” such as retained sponges, wrong site surgery and death from hemorrhage.  With the encouragement of my surgical chief, I founded the Center for Innovations in Quality, Outcomes and Patient Safety, but had zero budget and no dedicated FTE’s.  However, we had the incredible support of our hospital’s leadership and were able to assemble a volunteer multidisciplinary team that included nurses, clerks, technicians, doctors and veterans themselves to tackle these patient safety problems head on.  We implemented evidence based quality improvement strategies such as crew resource management training developed by NASA to create a culture of safety, mandatory safety checklists learned from the aviation industry, 100% pre-procedure briefing and post-procedure debriefings, and promulgated use of the ACS NSQUIP calculator for high risk patients. 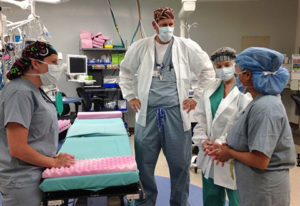 We went from being an outlier for high mortality to an outlier for low mortality; our surgical mortality decreased by 66%.  We also moved from having multiple “never events” to zero.[i],[ii],[iii]  The Shreveport team’s work was profiled by the VA National Center for Patient Safety as a success story that demonstrated how patient safety can serve as a rallying theme to create real, concrete change.[iv]

The lesson I learned from this experience is that you don’t have to wait to be allocated a budget, staff or have a wealth of resources.  You see a problem.  You know what the evidence-based strategies are. You implement them.  It’s not that different from the time you cracked open a chest, clamped an aorta, and massaged a heart – all in the middle of the loud clamor of a ED bay crowded with twenty team members.  The fact is, surgeons are well trained to lead teams, turn chaos into order and get rapid results.  You know how to take decisive action, you know how to create order, and you know how to get results.  So, start with what you know.

A few years later I was recruited to serve as Chief Medical Officer for Medicaid for the state of Louisiana.  As part of my every day work I oversaw teams leading the Quality Section, Benefits, Covered Services, Clinical Policy, Pharmacy and Health Information Technology.  In addition, I tackled the emerging crises du jour.  One of the first crises I faced in this new role was the Zika virus outbreak, which is both a mosquito borne and sexually transmitted virus.  We created policies to enable access to mosquito repellent, family planning services and condoms, and started an educational campaign that made Louisiana the first state to have a Zika transmission prevention strategy for pregnant Medicaid women.  As these Zika prevention efforts were rolling out over the summer of 2016, the Louisiana Great Flood also hit the state, imparting $20.7 billion in damages statewide.  I went to auditoriums converted into flood shelters to help coordinate volunteer medical relief efforts, spoke at town halls about mold dangers and tetanus shots, and our team worked to ensure Medicaid patients had access to vitally important prescriptions and medical equipment such as wheelchairs and ventilators lost during the flood.[v]  I am amazed by the commitment of my Medicaid team members, many of whom had lost their own homes or vehicles during the flood but still worked to ensure our vulnerable Medicaid patients had access to care.

But my biggest challenge was the opioid epidemic.  Louisiana had one of the highest rates of overdose deaths and opioid prescriptions in the nation, with more opioid prescriptions than people in the state.  By implementing Medicaid payment reform to limit opioid prescribing, developing a state-wide naloxone standing order to allow the lay public to save lives during an overdose, supporting the creation and passage of legislation limiting opioid prescribing, and an aggressive educational outreach campaign with webinars, symposiums, and websites to support prescribers and patients, Louisiana Medicaid achieved a 40% reduction in opioids prescribed among new users.[vi] 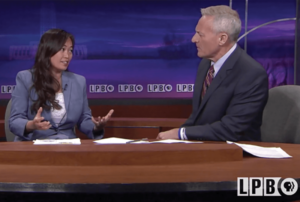 When I first started this role as CMO for Medicaid, as a general surgeon I had very little knowledge (maybe zero) about Zika, emergency disaster response or the opioid crisis.  It felt like that very first day of internship again; when you had to figure out how to pronounce a patient on your own, assess a consult for perforated bowel and free air and respond to the trauma pager, all while answering calls to replace electrolytes and renew a stool softener order.  Surgeons are equipped to adapt and learn fast, all while juggling the mundane.  The lesson I learned from these challenges was, never limit yourself to a niche.  The reality is, “internship” never ends.  Keep stretching, keep adapting, keep learning.

I was recruited back to the VA, initially to serve as Associate Chief of Staff at the Houston Michael E. DeBakey VA Medical Center, the most complex VA Medical Center in the country with the busiest OR and ER.  My work ranged widely from addressing hospital-wide readmissions and length of stay, to reducing hospital acquired infections through a Hand Washing campaign, championing flu shot efforts and leading emergency medical disaster responses during Houston’s historic flooding in the aftermath of Hurricane Harvey.  Then, I was asked to come to Washington DC to serve as Special Advisor to the Secretary of the VA.  And so, on a beautiful 70-degree sunshiny Houston day in December 2017, I packed two suitcases, went to Bush International Airport and three hours later, stepped off the plane at Reagan National Airport into a frigid, 11-degree winter reality.  I had no idea what to expect.

One of the first tasks I was given was employee engagement; how to tackle the issue that in 2017 VA scored 17th out of 18 federal agencies in the annual “Best Places to Work” tabulation.  VA wasn’t ranked as the worst government agency to work at; it ranked the second worst.  We convened teams consisting of regional leadership from across the country, employee engagement experts and worked with the VA’s national HR leadership to develop strategies to create a positive work environment.  At our initial meeting in Durham, North Carolina a year ago our team developed a moon-shot vision to one day have newspaper headlines say, “Employees Rank VA As Best Place to Work!”. 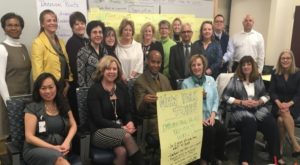 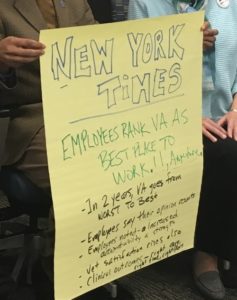 (Our vision of VA headlining as the best place to work.)

That vision guided the team’s work as we developed a Frontline Supervisors’ Week, Leadership Engagement Series, and training resources to improve employee morale.  I met with union leaders who represented more than 250,000 of the VA’s employees, to gain their perspectives on how to make VA a better place for employees to work at, and presented these lessons learned to the chief of staffs for VA, VBA, NCA and VHA.

A year later, in December 2018, we didn’t make it to our moon shot of headlining as the “Best Place to Work” in the country.  But, thanks to the amazing dedication of so many committed public servants passionate about making VA a great place to work, we rose from “nearly the worst” to becoming the 6th best place to work among federal agencies.[vii]

I worked on a series of other different projects in DC, from improving the safety of sterilization of surgical equipment to serving as the first woman to be nominated and appointed as Deputy Under Secretary for Health for Community Care for the US Department of Veterans Affairs.

After my year of service, I returned to Houston and my family, incredibly grateful to have had the opportunity to serve our country and our nation’s heroes.

When I got off that plane at Reagan National Airport into the freezing December cold last year, I walked into an unknown.  But as surgeons, when we open that belly for a damage control laparotomy, we often don’t know what we’ll find.  However, we go in with clear eyes and courage, driven by conviction that we have the opportunity, and the obligation, to do everything we can to save that patient’s life.  What I learned from this experience is, don’t be afraid of the unknown.  Embrace it.

Three Lessons of Leadership…  And a Fourth One

In my journey as a surgeon in healthcare leadership, I learned three key lessons:

But I’ll add a fourth lesson…  Enjoy the ride!

Inclusivity
Less Than A Month ‘Till ASC 2019!